Rachel Bustos, president of Burn Construction Co., poses for a photograph at a jobsite on Tuesday in Picacho Hills.(Photo: Robin Zielinski / Sun-News)

LAS CRUCES —Since 1997, Rachel Bustos has been building a career in, well, building things. At the same time, she has broken through the “glass ceiling” in a male-dominated industry that she simply shrugs off as a non-issue.

As one of a handful of women leaders of construction companies, the president of Burn Construction Co. has been a female pioneer in a predominantly male-dominated industry. But that fails to faze her. She said her upbringing and experience in the construction industry have given her a “thick skin” and said she has never felt any pressure working alongside rough-and-tumble construction crews.

She started working for Burn Construction in January, 1997 as a project management intern while finishing her degree in civil engineering from New Mexico State University. After graduation, she stayed on as a project manager and, after a few years, started estimating projects. She became executive vice president in 2000 and president in 2012. In that role, she still continues to do all the estimating and project management along with all the other duties that come with running a company. 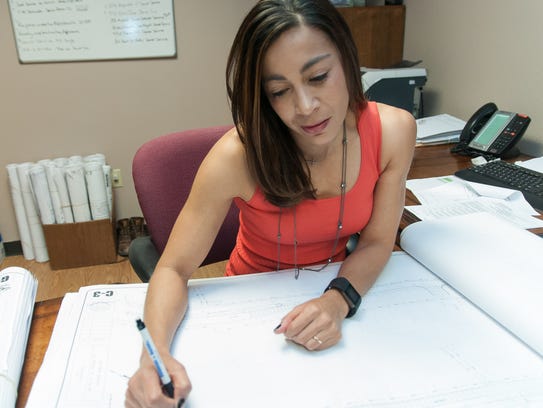 “I have never really felt discriminated against in the field of construction because I’m a woman,” she said. “I’ve always enjoyed a challenge and have worked hard to earn the respect of our employees and clients. My father was in construction and I grew up with two older brothers that taught me to work hard and be tough. They made me who I am today.”

Burn Construction has a storied history in New Mexico. The company was founded in 1927, originally as a partnership known as Hayner & Burn. In August of 1957, the company was incorporated under the laws of the state of New Mexico as Burn Construction Company, Inc. and has operated under that name continuously for the last 58 years. The current chairman of the board is Dennis Burn, the grandson of the company’s founder.

The company’s primary focus is heavy civil construction with an emphasis on projects involving earthwork, utility installation, street construction and sewer treatment plant construction. Over the years, the company has built projects that vary from the tunnel on Hwy. 82 between Alamogordo and Cloudcroft to residential and commercial subdivisions and municipal utility rehabilitation and roadway projects.

Many of the foremen and the general field superintendent have been with the company for more than 20 years. Members of the Burn family have held the majority of outstanding stock in the company since incorporation in 1957. Currently, the company is completing work on a roughly 50-pad subdivision of townhomes in Picacho Hills called the Willows at Picacho Mountain.

“It’s exciting to have a part in building something that will stand for years to come,” Bustos said. “It starts from getting a new set of plans and looking at them for the first time. I start building it in my head, on paper, and then in our estimating software. When I actually get to see it come together and finalized in the field, it’s a feeling of accomplishment.”

Bustos said the construction industry in Las Cruces over the past few years has relied largely on municipal construction while the city recuperates from the slump in the housing market which was overbuilt when the bottom fell out and the nation went into a mortgage crisis.

“Back in 2008 there were so many subdivisions going in, we haven’t caught up yet,” she said. “But I think we are getting close.”

More job creation in the area will be necessary to boost private home or commercial construction, she said.

“It makes everything run,” she said. “You get more people in the area, more money is going to be spent in retail, everything across the board.”

Outside the office
Bustos is an admitted workout nut. She said she started working out to alleviate stress, but it has become a daily activity, whether lifting weights or running.

She and a group of friends have taken part in a couple of Tough Mudder runs and obstacle course runs, seeking out a new location every year to travel together and enjoy the challenges. So far they have visited San Diego and Phoenix.

“We try to go to a different spot every year,” she said. “Now we are trying to plan next year.”

When not building plans, plowing roads or slogging through obstacle courses in the mud, Bustos said she loves playing with her dogs, 11-year-old chocolate laborador, Bella, and 8-year-old black laborador mix, Presley.

This entry was posted in Alumni News, News. Bookmark the permalink. Follow any comments here with the RSS feed for this post. Both comments and trackbacks are currently closed.

Tell us a little about yourself and we'll provide you with more information about the College of Engineering.

There are no upcoming events.